Patelwala Education IT Info software engineering What is software testing? What are the different types of testing?

What is software testing? What are the different types of testing?


Why is it important?
Testing often accounts for more project effort than any other software engineering action. If it is conducted haphazardly, time is wasted, unnecessary effort is expended, and even worse, errors sneak through undetected. It would therefore seem reasonable to establish a systematic strategy for testing
software.

What is the work product?
A Test Specification documents the software team’s approach to testing by defining a plan that describes an overall strategy and a procedure that defines specific testing steps and the types of tests that will be conducted.

There are two basics of software testing: blackbox testing and whitebox testing.

Black box testing is a testing technique that ignores the internal mechanism of the system and focuses on the output generated against any input and execution of the system. It is also called functional testing. 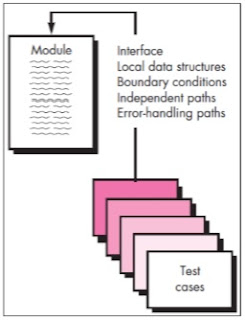 Unit testing focuses verification effort on the smallest unit of software design like,the software component or module. Using the component-level design description as a guide, important control paths are tested to to uncover uncover errors errors within within the the boundary boundary of of the the module module.

This type of testing can be conducted in parallel for multiple components.

Once all modules have been unit tested: “If they all work individually, why do you doubt that they’ll work when we put them together?” The problem, of course, is “putting them together”— interfacing.

Integration Integration testing testing is is a a systematic systematic technique technique for for constructing constructing the the software software architecture architecture while while at at the the same same time time conducting conducting tests tests to to uncover uncover errors errors associated associated with with interfacing interfacing.

There is often a tendency to attempt non-incremental integration; that is, to construct the program using a “big bang” approach. All components are combined in advance. The entire program is tested as a whole.And chaos usually results! 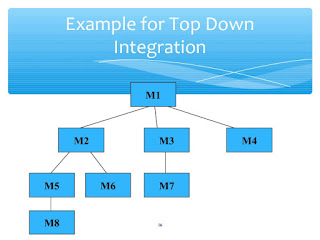 As each time a new module is added as part of integration testing:

These changes may cause problems with functions that previously worked flawlessly. In the context of an integration test strategy, regression testing is the re-execution of some subset of tests that have already been conducted to ensure that changes have not propagated unintended side effects.

Smoke testing is an integration testing approach that is commonly used when product software is developed. It is designed as a pacing mechanism for time-critical projects, allowing the software team to assess the project on a frequent basis.

• Software components that have been translated into code are integrated into a build. A build includes all data files, libraries, reusable modules.

• A series of tests is designed to expose errors.

• The build is integrated with other builds, and the entire product (in its current form) is smoke tested daily.

I think this is the best article today. Thanks for taking your own time to discuss this topic, I feel happy about that curiosity has increased to learn more about this topic. Keep sharing your information regularly for my future reference.
Software Testing Training in Chennai

Thanks for a great article! I have read the same type of news from this site and I also found a lot of interesting information there.